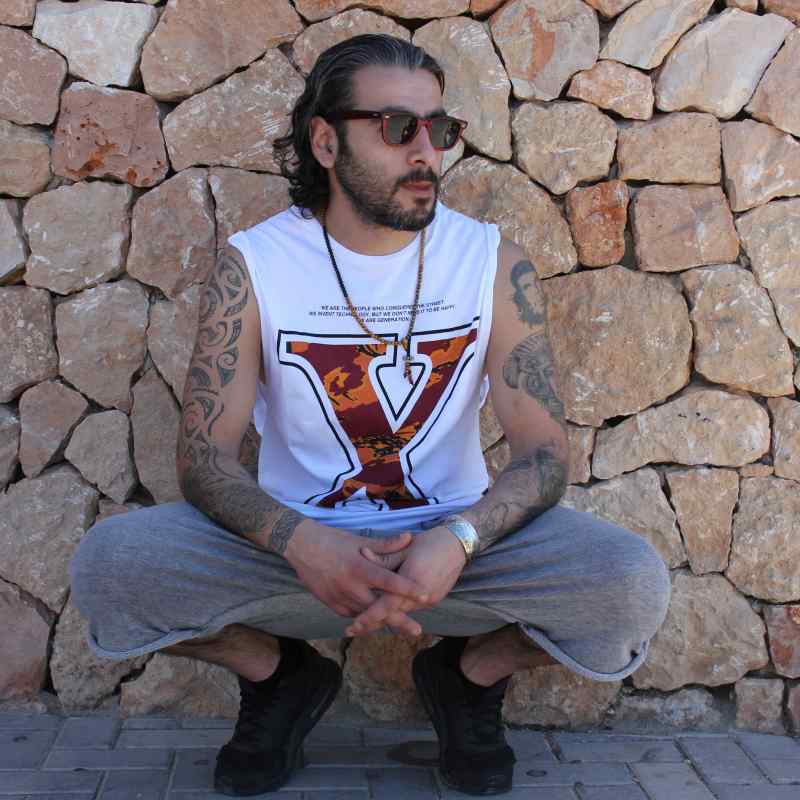 There is a wild unbridled energy to Burak Sar aka SIS. At any moment, he will change character; each one of his faces is as emotionally believable as the next.
The mischievous schoolboy, the brooding artist, the entertaining clown, the lovable rogue; with hints of criminality, insanity, and tortured genius all in one, a rollercoaster of personalities he is, theatrical and yet, as real and deep as the ink that covers his arms and chest.

That volatile mix is just who SIS is. With Turkish genes, a German upbringing, and a deviant teenage life that saw him tussle with ganglife and engage in cheeky, morally grey activities, SIS is the exact opposite of the cardboard cut-out, squeaky clean radio DJ.

His musician father was the one, who introduced him to music. As a young boy, SIS used to accompany his father to smoky gigs with his Turkish musical group, where bearded men of sweat created hypnotic rhythms and intoxicating folk using only their rough hands, exotic instruments, drums, and spit. The raw intense collaborative music sessions were imprinted firmly on SIS’ soul, affecting him and his music ever after.

It was a dancefloor epiphany that led SIS to discover DJ culture and techno, and soon afterwards he was DJing in dark basement clubs in Frankfurt and Mannheim, desperate to recreate the addictive moments of ecstasy. SIS’ yearning to express his wild, untapped thoughts drove him to music production in 2006, where he quickly honed a unique house music style influenced, not by contemporary club music trends, but by raw musicality and flickers of his colourful past, global ancestry, and intense personality.

Success soon came. Following a series of international club hits on Nick Curly’s Mannheim label Cecille, which included 2007’s vocal trip ‘Nesrib’, SIS became the talk of Berlin. But it was only after handing a wild, gypsy-folk influenced house track called ‘Trompeta’ to Ricardo Villalobos at Robert Johnson club in Frankfurt, that SIS found himself in the company of electronic music greats – Villalobos loved ‘Trompeta’ so much that he released it on his own boutique label Sei es Drum, which up until that point, had only showcased Ricardo’s own mystical productions.
‘Trompeta’ was arguably the hit track of summer 2008, and its rise to dominance resulted in an avalanche of recognition.

That year Germany’s Groove Magazine named SIS ‘Producer of the Year’, and awarded him ‘Track of the Year’ for ‘Nesrib’ (incidentally, ‘Trompeta’ came 2nd). That year, Raveline Mag also named SIS their ‘Newcomer of the Year’.

Riding a well-deserved wave of hype, SIS continued to grow and evolve into one of electronic music’s most prolific producers, DJs, and live acts. Sven Väth signed SIS to his Cocoon DJ agency and he became a resident of the ultra successful Cocoon club night in Ibiza. Then in 2011, SIS launched his own label Cocolino with his debut album release ‘Dejame’, and began hosting regular label nights at Berlin’s Watergate club.

That year, he also produced an album of dancefloor edits for Get Physical, called ‘SIS IS SIS’, and continued on his quest to entertain global dancefloors with his unique live shows and hedonistic DJ sets.

In 2012, Damian Lazarus also snapped up SIS for a five track EP on his Crosstown Rebels imprint, which included the hit track ‘Faces’. SIS also released a big single in 2012 called ‘Foxy’ on Bouq, which fellow German beat-maker Butch remixed.
In April 2013, the Berliner dropped his 2nd album ‘Confidance’, a 10 track longplayer linked to his training as a horse whisperer. The raw dancefloor album was released on Cocolino, and amongst other accolades, was named Album of the Week on EQTV.

SIS has lived in Mexico for the last two years. After he was booked for his first 3 gig tour to America, he stayed right there and toured from the South to the North. On 10th of January 2020 SIS played his last gig for the famous Day Zero party in Tulum and since that he returned back to Europe and his son and is now busy working in the studio.

“Chupacabra”, is SIS first downbeat – ambient album with under 80bpm, inspired by artists such as Craig Prues and Istvan Sky – it’s a real lockdown baby.

Beside all that SIS launched his new label Sombra Records, with it’s kick off event at La Terrazza, Barcelona  and is working on his new live show.

Under the name SIS & the Solo Ensemble, this outstanding musician will represent his wide range when it comes to instruments – with 10 different instruments he will perform oldies but goldies, but also new and un-released tracks.