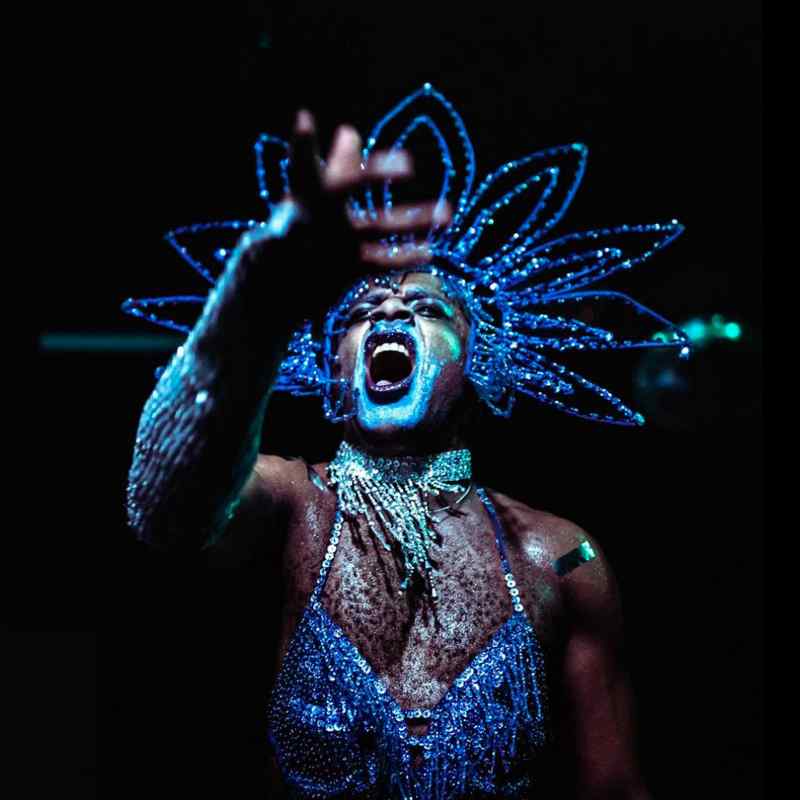 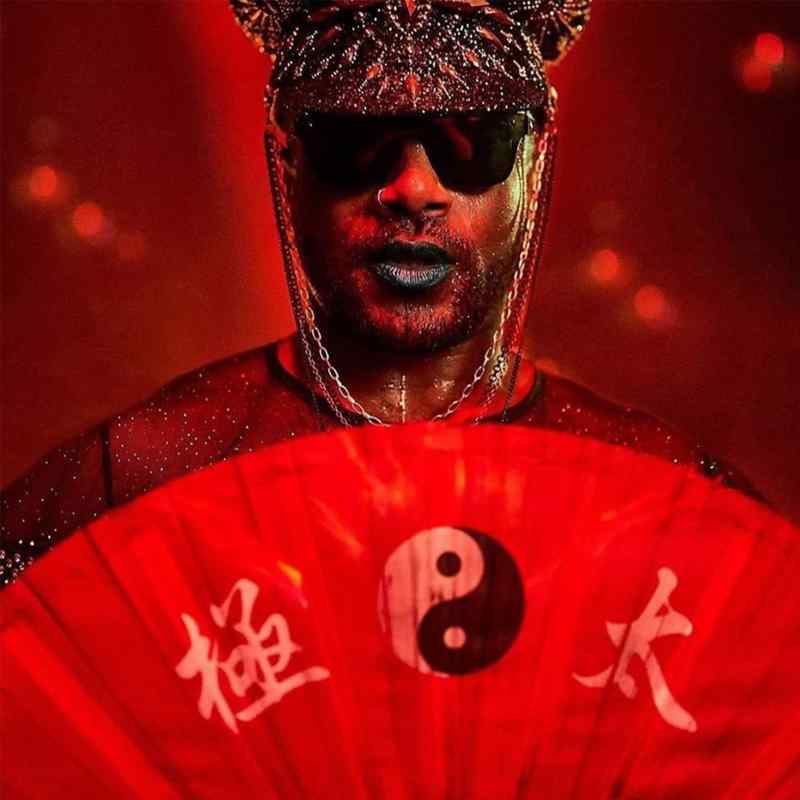 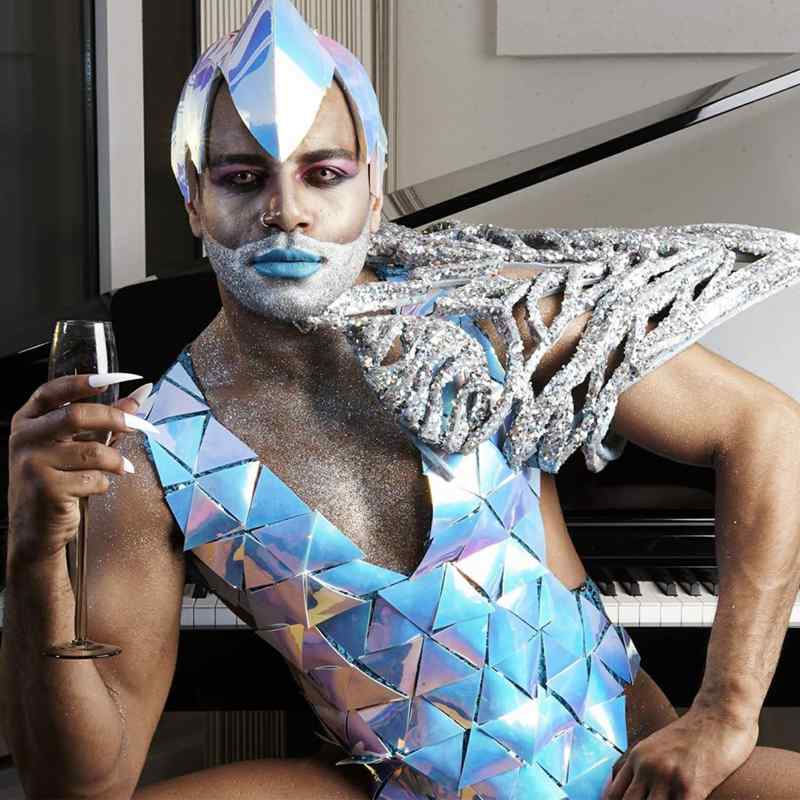 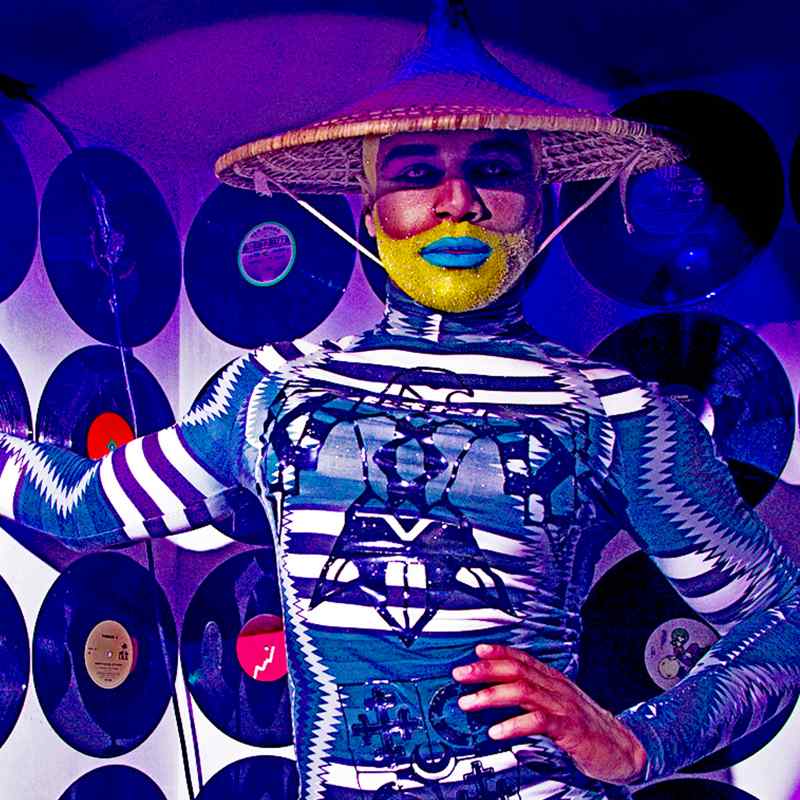 Raven Mandella is a prof. Dancer/Choreographer, who travelled the globe dancing in production shows and backing dancing for artists including, Nile Rogers, Pink, Little Mix, Alexandra Burke, Years and Years, Fluer East and many more! This lead Raven to become the leading role in all visual aspects of Defected’s famous Disco brand, Glitterbox which will celebrated its 5th season in Ibiza last Summer and was the most successful event at super club Hi Ibiza. A place where Raven was performing alongside nearly every famous House and Disco DJ from Honey Dijon to Groove Armada or Basement Jaxx to name just a few. This crazy party animal was the official brand ambassador for Glitterbox for more than 5 years. From the first moment he shared his visions and ideas about decoration, outfits, makeup, dance moves, choreography, the selection of the dancers, timings of performances during the nights etc. On top of which, Raven Mandella was the leading dancer and quickly became known as the face of Glitterbox and the person why many people wanted to attend the event (apart from the music).

A person who is kind, approachable and are able to touch and talk to. You can see his extreme and extravagant outfits and creative outstanding makeup on many record covers, artworks of the brand, event flyers and countless event pictures online and all across the globe. After many successful years with the brand, Raven decided to move on to work on his own career detached from the rules of the brand and free to reach completely new territories and unfold new parts of his incredibly versatile talents which includes to Deejay!!!

And nothing could fit better to him musically than classic Disco House. Music that can bring life to any party and have everyone in the room up on the tables dancing! Their is no doubt he wouldn’t get this already from just his extraordinary appearance! The best party guest you can imagine for your party, as a Dancer/Host he would obviously be even more fantastic, but as a DJ this is invaluable because it includes the whole package which is very unique. We think it doesn’t need much imagination to get an idea that this outstanding bird of paradise of the night life, has a huge future ahead to work to become the face of his own brand Raven Mandella. All who have had the luck to experience this crazy lovely person live at a party will know and quickly agree:

THERE IS NO RAVE WITHOUT RAVEN!

Fire off the glitter canons and roll out the purple carpet, because the Queen of the island has arrived. Swathed in a cloud of confetti, the drag powerhouse that is Raven Mandella is strutting around in all her glory, blowing up the night time landscape as Ambassador for Glitterbox, the euphoric club night held at Hi!. This year feels extra special for Raven because of the devastating ordeal she has been through in recent months. After enduring abuse at a party a fight broke out and she ended up in prison. Six months behind bars followed by the death of her beloved grandmother changed everything for Raven, but now she is back with a bang .

“This island is allowing me to build energy on top of my broken heart. And rise up once again, stronger than ever before! And for that I will be forever thankful to Ibiza,” Raven told us. It’s a terrible cliché but Raven’s life really has been something of a roller coaster. The eldest of five children, with a mother who had to resort to prostitution to provide for her family, Raven grew up fast, and grew up tough. “My father died before I was born and my mum sacrificed herself for her children, that’s true love to me,” she recalled.

“Watching her transform herself before she went out at night was my first experience of drag. Seeing her character change as she put on PVC boots was powerful for me.” Although Raven knew she was gay when she was just four years old, she did not dare come out to her blunt-speaking Northern family until she was 23 – and only then because a cousin threatened to tell her mum before he had a chance. “I’ll never forget telling my mum I was bisexual, she turned round and said, ‘So am I!’ “We lived in the ghetto in Leeds,” she explains. “Everyone just knew me as Neil but I always thought there was something wrong with me. I wasn’t cool, I was sensitive and I bruised easily. “Keeping my sexuality secret was like a shadow over me, a horrible black dementor. “Nobody aspired to anything beyond working in Asda, but I auditioned for theatre college and the black shadow disappeared.”

Dancing for legends including Pink and Nile Rogers meant Raven could save up and move to London where she quickly made a name for herself as a drag queen. But Raven almost lost it all after a party in early 2016: “I clicked with a guy, which is unusual for me, and I opened my heart but he had weird friends who started insulting me, spitting in my drink and calling me names. I felt trapped and vulnerable. I should have just walked out but I snapped and punched two of them.” Raven left one of the men with a fractured nose, the other with a shattered eye socket, and the police were at her door the next morning. The court case resulted in Raven serving six months in jail. Bleak and oppressive, prison life was a stark contrast from the daily dose of glamour she was used to. “It was horrendous,” Raven said.

“I was locked up for 23 hours a day and during the one hour we were let out people were fighting, getting slashed and stabbed. It was horrendous, everything was grey. It’s kind of like crawling back inside yourself, going back to that dark place, having that shadow over you. You monitor the way you walk, the way you talk, the way you act, the things you say. It was like going back ten years. “I was cautious because I’d been around violence before. That world was familiar to me but I felt that everything I’d worked so hard for was gone. I couldn’t express myself, but I stayed strong.” Back in the real world Raven’s friends launched a Free Raven Mandella campaign and she was bombarded with so many letters from supporters that fellow inmates demanded to know if she was some sort of celebrity. “I showed the women in the kitchens some photos of me dressed up and they loved it. When word got out I felt I could breathe a bit more. I’m still in touch with some of the prisoners in there. “I’m sorry for what I did, you can’t cause pain and get away with it, but I have nightmares.” But there was yet more agony in store for Raven who lost his beloved grandmother shortly after being freed from jail: “I’d always feared my Nana Violet dying. The last time I saw her she gave me fabulous clothes and jewellery and asked me to dress her in drag and we had a photo shoot. I knew it would be the last time I saw her, I said, ‘The day you leave me will break my heart.’ “Everything slowed down and turned grey. Colourless, dull and blurry. But the only thing that I could see more vibrant than anything else was the colour purple! I knew at that moment that it was my nana telling me I’m here’ and that she always will be – in the colour purple.

“Then I was asked to be the Glitterbox ambassador, which felt like the universe’s way of saying you’ve suffered enough. “The last three years have been the hardest of my life but Ibiza saved my life, it has such a beautiful and powerful energy. It healed my broken heart. It’s a magical place with awesome energies. I become a different person when I’m there, I feel closer to Nana.”